Horns, Feathers & “If A Tree Falls”

Added by WeeklyComet on February 8, 2012

On this episode of “The Weekly Comet” singer, songwriter and trumpet player Matt Von Roderick performs two songs off of his upcoming album, including “Let The Trumpet Talk”, featuring burlesque dancers. 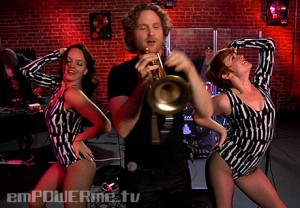