Roger Steffens, founder of KCRW radio show “The Reggae Beat” , renowned Bob Marley historian and owner of the largest Bob Marley and reggae memorabilia collection in the world drops by for a bonus segment on LifeBites Live!

Roger shares how he first became interested in reggae music, became a fan of Bob Marley and ultimately went on the road with and befriended Bob Marley. His photographs of Marley and his 6,000 other reggae collectables were put in an exhibition on the Queen Mary in 2001. Memorabilia in his collection range from flexi disk postcards used to smuggle Marley’s music into Communist Poland to Mongolian postage stamps bearing Marley’s face.

Roger also explains the fundamentals of Marley’s “One Love” philosophy and the Rastafari movement and gives some insight into what Marley was like in person. 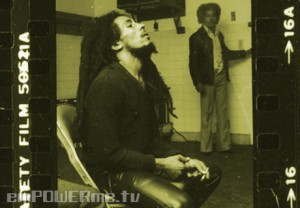 The Power Behind the James Bond Theme Song