This week’s Style Gospel According to Luke is all about cutting off momentum of negative remarks. Luke shares a few tricks he’s learned as a seasoned stylist on a movie set, encouraging viewers to “Cut and Reset” when the self-deprecating remarks begin. By resetting, we rob the harmful comments of their power and end a lifetime of bad habits.

Next on our Father’s Day Festival, celebrity stylist Chris Mannor flies into the studio to talk about what’s hot in men’s jeans. Chris has worked with some big names like Lindsay Lohan, Jesse McCartney, and Vanessa Williams, as well as having work featured in films like Wanted, starring Angelina Jolie and hot magazines like Upscale. Together Chris and Luke dish on men’s jeans and how to sport a great, slimmer look without feeling emasculated. With brands from high-end designers like Adriano Goldschmied or more affordable brands like Mossimo, there’s a jean for every man. The Hollywood stylist also gives advice on tailoring, when even the best jeans from stores like H&M or Urban Outfitters aren’t making the cut.

On The Inside Job, we take another important step on our quest for image transformation. This week, Luke gives us the tools to start to shift our negative ideas into neutral. He breaks down the categories of negative remarks and hands us an exercise that will go a long way in transforming our value judgments and taking back control.

It’s all about men’s jackets in this edition of Hollywood Minute Makeover. Our favorite costume designer and body image guru breaks down the differences between blazers, sport coats, and suit jackets and which looks are professionally or socially appropriate, whether the coat is wool, tweed, woolen, or plaid. He’ll also show us how to spot a good fit with jackets from Paul Smith and Calvin Klein and where to start fitting the torso.

Stylist, designer, and photographer Jonathan Skow joins Luke to talk about the latest in menswear with his red-hot Mr. Turk Line. Mr. Skow’s not only famous for his colorfully bold line (with which he also collaborates on with his wife, designer Trina Turk), but also for his gorgeous photography. Mr. Skow’s long list of clientele includes several of Hollywood’s young elite, like Zac Efron, Jesse McCartney, The Jonas Brothers, Kerry Washington, Katherine Heigl, Justin Chambers, Mary-Kate and Ashley Olsen, Eva Longoria, Lindsay Lohan, and Hayden Panettiere, to name a few.

Mr. Turk shares several of his favorite pieces from his line, including variations of a fantastic poppy pattern that’s perfect for summer. The designer mixes it up with woven Jacquard jackets with print overlays and orange cotton blend pants cut like a fabulous pair of jeans. These bursts of color and trendy designs—inspired partly by southern California architecture—will leave you itching to race to the only Mr. Turk store in the country, located in Palm Springs. 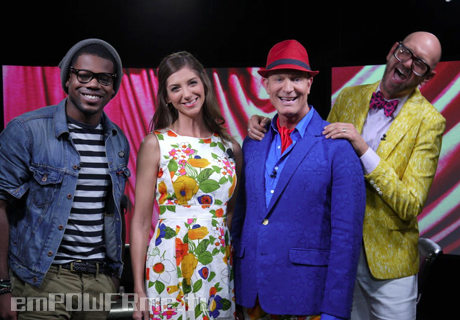 Ric and Inna discuss the pitfalls in relationships with sex and intimacy and sort out the difference.   Ric Drasin Pro Wrestler, Bodybuilder and legend in both fields developed Tuff and Tender years ago on his website...