Artisan Acqua is the fifth Varvatos scent and third in his Artisan vertical. The designer’s first signature fragrance appeared in March 2004, followed by Vintage in August 2006, Artisan in March 2009 and Artisan Black in late April 2010. As he has done with all of his previous fragrances, the designer collaborated with Rodrigo Flores-Roux, senior perfumer at Givaudan. Brian shows his personal favorite the traditional “Artisan” and is thrilled to try Acqua.

Sweater Pants, aka “Swants” are all the rage right now. People are converting their sweaters more and more and we’re also seeing a TREND in men’s wear and “swantsing” around town.

Finally we discuss Lady Antebellum’s Dave Harwood, Anne Hathaway at the Oscars, and Carrie Underwood’s tour de force runway show…aka her hosting the CMA’s in nine different outfits. Brian thought this was distracting and a dated way of presenting at a fashion show, but the Country Music Awards are certainly continuing the awards show mystique by having the female hosts have way too many gown changes. Is it too distracting or do you find it adds to the ceremony? 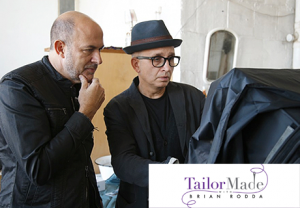 Jackie tackles the tough – and for many -  very personal subject of cancer this week. With 35% of all cancers being nutrition-related, Jackie discusses how cancers are linked to nutrition and why and what you can do...