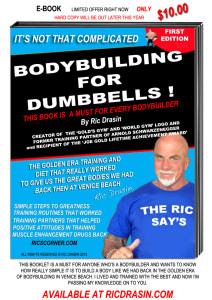 New years resolutions discussed by Ric Drasin and Inna Tuler explaining on how to have a better year in 2014 just by making a few positive changes.

Ric Drasin received the Joe Gold Lifetime Achievement Award for all his years in Bodybuilding, Pro Wrestling and Acting and what he’s given back to the sport as an icon and legend, including the history of the Golden Era on Ric’s Corner. Also World Gym re-released the original Gorilla Design that Ric did in 1974 for Joe and now bears his signature as a signature series shirt.

Known for his years in Bodybuilding and Pro Wrestling as a legend today also with his show Ric’s Corner  www.ricscorner.com

Inna Tuler – owns a multi million dollar construction company and is an accomplished pianist and marathon runner.  Inna also trains with Ric and has much knowledge on fitness, nutrition and how to stay in the best shape.

Tip of the Week.  Pick a sport to do and use it to get in shape.  Something you enjoy 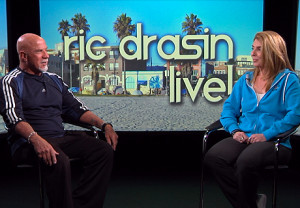 Robert Patrick chats about his new series Scorpion on CBS premiering this month on September 22nd. The pilot episode was directed by Justin Lin (Fast & Furious) and is about an eccentric genius forms an internatio...

Leg press if done properly will give you great results very similar to the squat without having the pressure on the lower back. This video shows the proper way to do it.   Ric Drasin, former Pro Wrestler (T...

Fritz Coleman (born May 27, 1948 in Pittsburgh, Pennsylvania) is a weathercaster for KNBC-TV in Los Angeles, California.[1] After he grew up in Radnor, Pennsylvania, he attended Salem College in West Virginia and T...

Proper form is necessary on lat pull downs to develop the back and the lats on the sides.  Do not swing or force heavy weights.  Proper form is essential   Ric Drasin, former Pro Wrestler (The Equalizer) ow...