Ric Drasin and Inna Tuler discuss New Years Resolutions for you, your loved ones and family.  These are different than most resolutions that you’ll here.   Everyone usually has the standard ones but these have a varied twist to them.

Ric Drasin received the Joe Gold Lifetime Achievement Award for all his years in Bodybuilding, Pro Wrestling and Acting and what he’s given back to the sport as an icon and legend, including the history of the Golden Era on Ric’s Corner. Also World Gym re-released the original Gorilla Design that Ric did in 1974 for Joe and now bears his signature as a signature series shirt.

Ric Started Tuff n Tender about 10 years ago on his website and now brings it to you live.

Inna has 3 children of her own and her and Ric have good chemistry when it comes to talking about relationships and how to make them work.  She also owns a  multi million dollar corporation and relationships with employees plays an important part in all relationships. 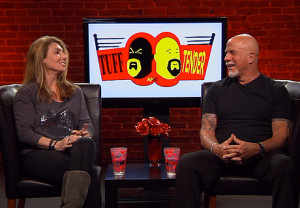 The Bornsteins on Tuff and Tender

The Bornsteins Jeff and Kimberly have been featured on TV's Master's of Illusion and their show will astound you, but the most remarkable thing about them may be that they met on Match.com and maintained a long dis...

Rock Riddle is a legend in Pro Wrestling known as the Original Mr Wonderful but it gets much deeper than that as he came to Hollywood working as an Actor as well, then an agent and a publicist.  Now runs Hollywood Suc...

Having a Plan B – Ric Drasin Live

Ric gives his Tip of the Week on having a backup plan in your career.

Jay Bednar was born and raised in Canton, Ohio.  He attended GlenOak High School and was involved in Football, baseball, and the National Honor Society.  Having had weights introduced to him at a young age by ...

Today's topic is Stay at Home Dads and what's expected of them in a marriage.  Is it good or bad, demanding or not and how do they handle all of it?   Inna Tuler Former concert pianist with a BA in Perfo...