In the news: It’s hard to believe that it’s been 25 years since Michael Jackson’s “Bad” was released. In honor of the milestone, a deluxe package, “BAD 25,” will be issued on September 18. It includes never-before-released outtakes and demos from the album and the first-ever authorized DVD release of his 1998 Wembley Stadium show during the record-breaking tour. Plus, Fueled by covers from such stars as Fun., Katy Perry, James Franco and even her mentor Justin Bieber, Canadian “Idol” alum Carly Rae Jepsen’s “Call Me Maybe” is rising steadily up the Ultimate Chart landing at No. 2 this week. And, The Comet favorite Fitz and the Tantrums are working on their sophomore album at Hollywood’s Sound Factory Studios with producer Tony Hoffer. To hold over fans, they are offering a free EP of live tracks and an exclusive remix of “Breakin’ The Chains of Love.” Get it here!

Film, TV and video game composer Inon Zur, whose credits include such hot games as “Prince of Persia”, “The Lord of the Rings”, “Dragon Age”, “Fallout 3” and “Fallout: New Vegas” talks about the differences in scoring for different mediums. Plus, he reveals the secrets for composing for Massive Multiplayer Online games as well as what it was like studying with the legendary Henry Mancini. Click here for more info on Inon.

KCRW DJ Jason Kramer is back with his Pick of the Week, The Neighbourhood, who just signed a mega deal with Columbia Records.

Electro pop rockers Maniac take the stage for two songs. Founding members, Jake Grigg, who hails from Sydney, Australia, and Oakland’s own Shawn Harris, talk about what is was like writing music via Skype. Plus, Shawn reveals how me made the video to “Thank Each Mistake” solely with an Ipad app called Brushes. Jake and Shawn are gooey islands of creativity who hitchhiked across America for inspiration and almost never came back home. Plus, their unique DIY attitude helped them raise funds for their sophomore album “Sons of Summer.” Watch to find out how! They are currently on tour with Foxy Shazam. Click here for more info on Maniac. 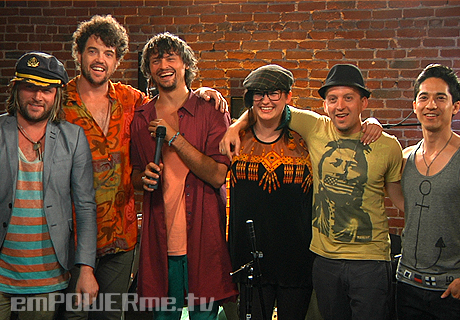