In the news: Justin Bieber protégé Carly Rae Jepsen’s has finally stolen the No. 1 spot from Gotye on the Ultimate Chart. Plus American Idol winner Phillip Phillips’ first single “Home” bows in at No. 3. Speaking of The Bieb, he released his next single called “All Round the World” off of his new album “Believe.” The track features Ludacris! Def Leppard brought down the House of Blues the Sunset Strip in the afternoon no less during a special YouTube show. The band will kick off their aptly titles “Rock of Ages” tour on June 20. The line-up also feature Poison and Lita Ford.

California hipsters The Miracals take the stage for two songs “Tell Me You’re the One” and “Friends.” Co-host Jonathan McHugh coins their sound “jangle pop” cause its “sweet and popolicious.” The trio, fresh out of USC, talked about making the video to “Pretend” and eating pizza. KCRW DJ Jason Kramer joined for the interview. For more info on the band click here. 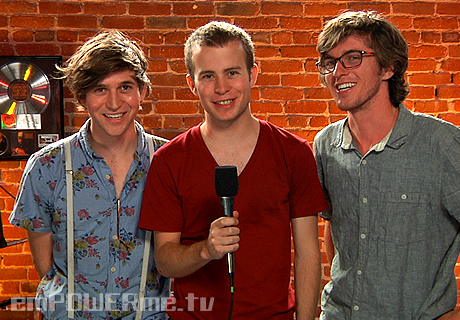