This week, Luke shines the spotlight on special guest Verdine White, the iconic bass player known as the “fire” in the hugely popular band, Earth Wind and Fire whose hits include, “September,” “That’s The Way of The World,” “Shining Star” and “Boogie Wonderland.”

Luke and Verdine light up the set as they take us back through Verdine’s history as a unique, fashion-forward rockstar, who’s style is as stellar off stage as it is on.  Having worked with costume designers such as Bill Witten (Michael Jackson, Neil Diamond, The Commodores, Hugh Hefner), Louis Wells and Bernard Jacobs, EWF made a name for themselves with their new brand of R&B/funk, costumes and showmanship. As one of the first black bands to play in arenas like Madison Square Garden and the Los Angeles Forum, EWF was competing for top of the charts against rock and roll bands like The Rolling Stones and the Beatles.

Maurice White, the founding member of the band always stressed the visuals…so as the band got bigger…the costumes got bigger, enabling Witten to take the African Dashiki look and bring it to the main stage.  This connection to the band’s African Roots allowed them to stand tall and “Be black and Be Proud.”

Verdine’s off stage style is a combination of his own design ideas and the designers he loves, including Bernard Jackson, who designed Verdine’s handmade jeans with rhinestones and other gems.  His green velvet jacket worn with trousers or jeans, is from Yves St. Laurent, and Verdine loves to shop at Bergdorff’s in New York and Barney’s in LA.  His favorite store in Tokyo is Issey Miyake and he loves to bring home accessories from around the world. 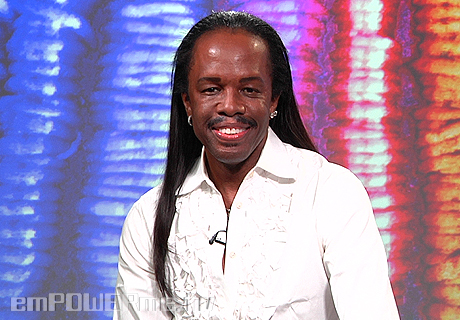