In this week’s episode, co-hosts Jonathan McHugh and Tamara Conniff dish on what to see at Coachella this year. Plus, in the news, Justin Bieber tops the Ultimate Chart with his new single “Boyfriend”.

For the live performance, NO, a five piece ‘post hymnal – anthematic’ indie rock band from Echo Park, Los Angeles, take the stage and play “Another Life” and “Big Waves” off their EP, “Don’t Worry You’ll Be Here Forever”. The band wrote this collection of songs together throughout the past year on various neighborhood stoops, in bedrooms, lounges and balconies. The band’s founding members Sean and Bradley talk about the hipster Echo Park scene and their label/local record store Origami Vinyl. Download the EP for free here.

Jeremy Zuckerman and Benjamin Wynn, founders of music production and sound design company, The Track Team, talk about their latest animated series, “The Legend of Korra”, which premiered on Nickelodeon April 14. “The Legend of Korra” is a sequel to the hit television series “Avatar: The Last Airbender“. Jeremy explains his music composition role, while Ben takes us behind the scenes of sound design. They discuss composing for animated TV series “Kung Fu Panda: Legends of Awesomeness“. Plus, Jeremy discusses his side project, a funk band called Cousin Junebug, while Ben divulges his alter ego as electronic artist Deru playing at this year’s Coachella Festival.

Fabian Alsultany and Tommy Rosen give the inside scoop about the upcoming Tadasana International Festival of Yoga & Music coming to Santa Monica Beach the weekend of April 20-22. Tommy says all yogis are welcome, no matter your level of experience. Each yoga class will feature a live band and the evenings will turn into a mini SXSW for world music, with musicians camped and a number of venues in downtown Santa Monica. 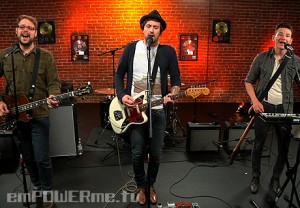