All of Miami turns into the world’s most deluxe souk the first week of December, as leading art and design galleries display their most provocative, beautiful, and arresting wares. Most of the works at Art Basel in Miami Beach and the attendant satellite fairs are for sale, but if you’re not buying you can simply consider it an over-the-top, never-ending exhibition. Because no one person can see it all, here is Vogue.com’s guide to the fifteen pieces, shows, and objects not to miss this week.

Brazilians flock to Miami no matter the season, and they are considered major movers of the art market there. This year, their influence is reflected in a brand-new satellite event, the Brazil ArtFair (brazilartfair.com). On hand near the Wynwood district will be over 100 artists showing with fifteen art and design galleries, and the fair is being positioned as an introduction to the country’s culture at large.
Pictured: (clockwise from left) Elizabeth Dorazio, Panta Rhei; Nazareno, Alguns conseguem; Claudia Jaguaribe, Serie Quando eu vi/ Bibliotecas

The Los Angeles–based sculptor Thomas Houseago has been gaining more and more attention for his monumental figural works—their primitive roughness grabs your attention, and their timeless artistry holds it. His Striding Figure (Rome I), 2013, is on display at Art Basel in Miami Beach’s Art Public.

Tastemaker and New York–based dealer Dominique Lévy is hosting a mini-exhibition called “Seeing Double” at the main fair this week, matching up two living masters: John Baldessari and Jeff Koons. Both men have a way of presenting the kitschiest parts of our culture and forcing us to look at them with fresh eyes. Lévy will be presenting major works by each.
Pictured: Jeff Koons, Pail, 1986

This year art-dealing legend Jeffrey Deitch, late of the Los Angeles Museum of Contemporary Art, is back curating Wynwood Walls, the outdoor street art gallery that he cofounded with real estate entrepreneur Tony Goldman in 2009. This round the focus is on women graffiti artists from all over the world. Aiko, Miss Van, Fafi, Maya Hayuk, and Lady Pink may not be household names yet, but Deitch and his cocurator Jessica Goldman Srebnick want to make sure visitors get an appreciation of their ground-breaking painting.

Mid-Century French Design
Mid-century French design is a reliable source of inspiration for collectors, and dealers oblige them this year by showing some choice examples at Design Miami/. The great Charlotte Perriand (1903–1999) is represented by a 1966 bookcase that is almost like a Mondrian grid come to life at the Galerie Downtown François Laffanour, and Jean Royère (1902 –1981) by an ash sideboard with blue opaline glass (revealed by a fanciful curving cut in the wood) at the Galerie Jacques Lacoste. Both offer solid proof of why we’re still beguiled by this period.
Pictured: (clockwise from left) Charlotte Perriand, Bookcase, 1966; Jean Royère, Ondulation Sideboard, circa 1950

In the past, rain boots used to be considered heavy, ugly, rubber footwear sported by farmers when working in the rice fields or cattle ranches, or mostly for children’s wear. But not anymore! They have recently emerged as the new hot, trendy, “must-have” fashion item among celebrities and fashionistas.

EVeryone from Rachel Bilson to Hillary Duff love a good pair of rainboots.

Well, if you can’t afford either a nice pair of Hunter’s or Aigle rain boots, check out two of these gems on catalogue classics for at least 50% the price:

5 Christmas Items, You’ll Want to Keep Around All Year Long!

Decorating the house for the holidays is something we look forward to all year long—so why not invest in pieces we can use for more than one month of the year? These 5 holiday décor must-haves are festive, pretty, and—unlike those bridesmaid dresses in your closet—you can totally use them for other occasions.

West Elm $49.50
Set the mood with these flameless candles–the room will simply shimmer.

Rodale’s $48.00
The traditional garland gets a fun update in fuzzy wool.

West Elm $249.95
This rich red decanter will look stunning on your table all year long.

Since its introduction in 1949, the Herme?s silk necktie has set the standard. It is a staple of CEOs, politicians, and royalty. Michael Bloomberg has worn one while opening New York fashion week. “The tie is not an accessory but a product we pay great attention to,” says Christophe Goineau, creative director of Herme?s men’s silk department. “The entire men’s silk department is devoted to it.” After bags and scarves, the cravat is the biggest seller for Herme?s, which is another way of saying it is the company’s most important item of men’s clothing. Last year, Herme?s posted a record net profit of $958 million, with an estimated 10 percent of sales in ties.

The company has rejected the outsourced, mass- production culture adopted by so many of its competitors, choosing to weave, engrave, and print its ties at middle-size workshops, known as ateliers, in Lyon, the longtime hub of the French silk trade.

The design process takes between six and eight months, requiring more than 2,000 hours of work for especially elaborate patterns. The assembly stage for the ties takes another six months. Giant rolls of silk, imported from the company’s farm in the mountains of Brazil, are spread across 50-meter tables. Artisans mix each color into the tie, applying it meticulously in an effort to find the right pattern. The silk-twill thread is then woven and undergoes several discrete stages of reviewing and finishing. “We control the whole chain of weaving to ensure a constant quality,” says Goineau. “The solidity of the twill is exceptional.”

On the surface, the Herme?s tie is made like just any other: The pattern is traced, the material is cut, and the pieces sewn together to make the tie. But several factors mark Herme?s as unique. While most ties manufactured by other companies comprise three pieces of fabric—the large end (the blade), the small piece (the tail), and, between the two, the neck piece (the gusset)—the Herme?s tie contains only the blade and tail. “When we print ties, we print the linings at the same time,” Goineau explains.

The creation process also gives the Herme?s tie its unusual ability to withstand years—decades, even—of wear and tear. He attributes the special durability to the triplure, a wool-and-cotton lining. “We have only one triplure in our tie, while our competitors use two materials,” he says. “The advantage is that this material supports very well if it is dry-cleaned.”

Recent innovations include silk ties made of thicker material and the size of the majority of ties being reduced to a width of 8 centimeters (compared with 9.1 centimeters previously). The latest collections reference the digital age, too, with ties featuring keyboards, microchips, and USB sticks. The USB tie even contains a small pocket for storing a flash drive. This season the theme is the sporting life, with designs featuring kite-surfers and boomerangs. Currently, a tie in the U.S. starts at $195.00

So what if you can’t afford a luxurious HERMES tie? Check out these other options on thetiebar.com 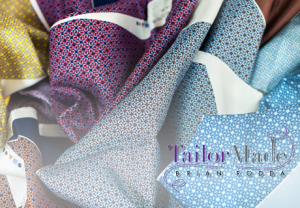