One holiday window trend that seems to get bigger every year: interactive displays. Many department stores had at least one interactive element in their windows, including Macy’s, Lord & Taylor, Saks Fifth Avenue and Barneys.

Macy’s Herald Square
151 West 34th Street between Sixth and Seventh Avenues
As usual, Macy’s has two different displays on view this year. On the 34th Street side is a revival of the store’s Yes, Virginia, There Is a Santa Claus windows from years past. The brand-new windows are on Sixth Avenue and depict the holiday dreams of a young boy as he imagines a magical winter wonderland complete with animated snowfall, icy woodland creatures, fairies, glittery baubles and other fantastical elements. If you long to see the Miracle on 34th Street windows Macy’s has featured in the past, you can check out parts of the display inside the store in the Santaland waiting area.

Henri Bendel
712 Fifth Avenue at 56th Street
Bendel’s windows pay tribute to late caricaturist Al Hirschfeld. Check out his signature take on famous folk like Woody Allen, Whoopi Goldberg, Sarah Jessica Parker, Matthew Broderick, Liza Minnelli, Marilyn Monroe and others. Many of Hirschfeld’s original drawings are on display inside the store and you can see even more of his work at The Line King’s Library: Al Hirschfeld exhibit, which is on view at the New York Public Library for the Performing Arts through Saturday, January 4, 2014.

Lord & Taylor
424 Fifth Avenue at between 38th and 39th Streets
Lord & Taylor’s windows are all about old-fashioned, early 20th-century glamor this year. The displays combine black-and-white graphics of period cars, menus and advertisements with animated holiday scenes featuring Santa Claus, Christmas trees, shopping and sumptuous feasts. There are also two photo booth windows (one on Fifth Avenue, the other on 39th Street) where you can pose for a full-length picture and text it to yourself.

Most of us have yet to master the smokey eye. Tal Peleg, on the other hand, is creating museum-worthy masterpieces on teeny-tiny eyelids.

The Israeli makeup artist is bringing eye makeup to a new level, drawing everything from sushi to Anne Frank to Rudolph the Red-Nosed Reindeer in the space between a person’s eyebrow and lower lashes. These miniature creations are truly works of art, as Peleg pays attention to the most intricate details. Even the color of the lower lashes is factored in.

So while we struggle to squiggle out a straight line of eyeliner, we suggest you marvel at some of Peleg’s handiwork below — and check out more on her Facebook page!

Insomnia, created after midnight…lots of sheep!

“Think of all the beauty still left around you and be happy.”
~Anne Frank
Inspiration is sometimes unexpected.
I didn’t plan to make this Anne Frank “look”, it just happend……

The Moomins!
My favorite tv show as a child

My new makeup looks are inspired by the two main characters of the upcoming Disney movie “FROZEN”, Elsa and Anna.
The movie is based on Hans Christian Andersen’s “Snow Queen”. It will come to cinemas at the end of this month, and I’m really looking forward to watch it!

Rudolph the red nosed reindeer ??
{This look was created as part of the Christmas songs themed collaboration}

If it’s possible to love a piece of clothing too much, our obsession with the classic chambray shirt puts us right over the top. Seriously — a basic denim button-up might just be the most versatile thing in your wardrobe, so why not wear it every day?

But, it’s true that familiarity breeds contempt — so, to keep you from getting bored with your trusty topper, we’ve uncovered some majorly fresh styling tricks that’ll give it new life. Ahead, 10 inspiring looks to help you do chambray the right way, every day.

Zara-A utilitarian topper is the perfect counterbalance to an ultra-feminine skirt, so pair your denim button-up with your girliest mini for a cool boy-meets-girl effect. Keep the accessories to a minimum for even more edge.

A printed denim shirt makes it even easier to do a little pattern-mixing. Don’t be afraid to resuscitate summer’s polka-dot or floral versions to wear with a printed scarf (or any other patterned wares in your closet).

Sometimes all you need is a new perspective to revive your love of a standard. In this case, an oversized silhouette makes the chambray button-down feel new and interesting, especially when you pair it with leather leggings and tough-chic accessories.

Don’t you think Gisele Bundchen would look really good in one of these? Well, you’ll especially think that once you see her in her natural element, her LA home that she shares with her Football Superstar Husband, Tom Brady:

The supermodel and star quarterback commune with family and nature in a welcoming, eco-conscious residence far removed from the bright lights of the runway and the gridiron

For Bu?ndchen and Brady living well also means living responsibly. Bu?ndchen is a global ambassador for the United Nations Environment Programme, and the couple is acutely aware of issues related to the conservation of natural resources. One of their primary imperatives when building their home was to use as many recycled components as possible and to implement energy and water systems that would ameliorate the family’s impact on the land. In addition to composting, gray-water technology for irrigation, and environmentally friendly construction materials, the pair installed two substantial arrays of photovoltaic solar panels (one next to the garden, the other on the roof of the house) that would meet all of the property’s electricity needs. “From the beginning we asked everyone involved in the design and construction, ‘How can we make it as sustainable as possible?’” Bu?ndchen says.

Incorporating those priorities into the design plan, Landry conceived an elegant interpretation of old-world European architecture—think French cha?teau via the Pacific Coast Highway—deftly attuned to the needs of contemporary life. The six-bedroom, nearly 14,000-square-foot house is constructed of different types of limestone, all acid-washed for patina and texture, with a traditional mansard roof of Vermont gray slate with zinc gutters and flashing. A winding driveway leads over a pond to a motor court paved in reclaimed cobblestones and then to a stone bridge spanning a koi-stocked moat that’s picturesque but not pompous.

“We love our solar panels,” says Bündchen. “With them, our energy bill is significantly lower and we can put energy back in the grid.”

The family room’s sofas are upholstered in a Castel cotton from Donghia, and the ottoman/cocktail table is covered in an embossed Bordoni leather from Richard Shapiro/Studiolo; the lounge chairs are by Michael Berman, the chandelier is by Formations, the table lamps are by Gregorius | Pineo, the curtains are made of a Sahco fabric, and the rug is by Tai Ping.

“We grow 85 percent of our fruits and vegetables,” says Bündchen. “Not only do we know where our produce comes from, but our children experience firsthand the connection between the earth and their food. The children also love going into the chicken coop and feeding the chickens. And it’s a blast to pick up fresh eggs for our breakfast in the morning.” 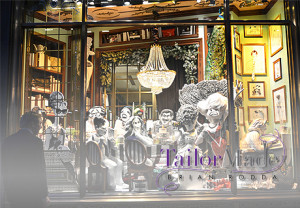