First on this week’s show, co-hosts Tamara Conniff and Jonathan McHugh dish the news. Jonathan gives us a Stagecoach Music Festival preview and Tamara reports the latest news including Australian artist Gotye finally landing at No. 1 on the Ultimate Chart, the invasion of Brit boy bands One Direction and The Wanted, the new Beach Boys (aka the original boy band) album and single and hot off of their Rock and Roll Hall of Fame induction, the Red Hot Chili Peppers will release a covers EP called “We Salute You” in honor of the inductees.

For more info on Daniel click here, for the Sony Classical soundtrack to “The Trouble With Bliss” here.

Folk and R&B infused singer/songwriter Christina LaRocca performs two songs, “Freddie” and “Call Your Name”. This Brooklynite talks about wowing audiences at festivals across the country. But Christina is not only an artist, she’s also a savvy business woman, and discusses starting L Rock Entertainment, a New York City-based company dedicated to “live performance and recorded music through musicians committed to creating art in their music.”

In 2011, Christina released her solo project with J Glaze Productions, “I Stand Tall With My Eyes Wide Open.” She currently has a deal with The Orchard to release her music digitally worldwide. 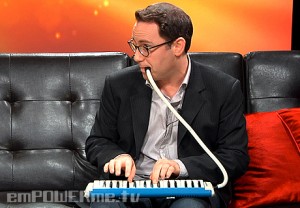