This week on Secrets of the Red Carpet, Luke Reichle is joined with some hot company. Special guest host Tamala Jones of ABC’s hit show Castle, warms up the audience with her smooth and silky voice, and the infamous and fabulous Traci Lords, who is best known for films “Crybaby” and “Blade.” Traci talks about taking on a new roll as writer and director, and how she turned her image around virtually reinventing herself and her stardom. Back with us in the studio for the 411 on prints and patterns, we have the style guru himself, Chris Mannor. Let’s break it down.

The carpets are as sizzling as ever as Hollywood transitions from summer blockbuster premiere season to fall’s award shows. The weekend is for the Emmy’s and this week on Red Hot on the Red Carpet, Luke features two fabulous style stars, summer fashionista Anna Kendrick and red carpet sweetheart Amy Adams. Anna rocks the champagne in Christian Dior and Elie Saab at the LA and London premieres of What to Expect When You’re Expecting, co-starring Cameron Diaz and Matthew Morrison. Trouble With the Curve star Amy Adams is flawless in stunning gowns at the Oscars, Golden Globes, and Screen Actors Guild Awards. When you’re paired with actors such as Clint Eastwood and Justin Timberlake, you always want to up your style ante.

On this edition of The Latest In, Chris Mannor, just back from New York’s Fashion week joins Luke in the studio to talk about what’s hot in prints. Hollywood’s finest have been spotted rocking the trend this week, including celebs like Kim Kardashian, Hailee Steinfeld, and Kelly Osbourne. Chris gives a few great tips on where to find these awesome looks—which are cheap and chic in TJ Maxx stores—and how to sport these bold patterns without overwhelming your body.

Loving who you are and what you see doesn’t happen overnight . . . Old habits die hard and, if you’re anything like Luke was, you’ve been saying horrible things to yourself for quite some time. But loving yourself? That’s a habit to embrace. The Corner of the Eye is the foundation of The Inside Job. It gets the train of image change going down the right track. You must be aware of what you say to yourself every time you look in the mirror. Once you acknowledge that ugly inner, you can begin the work to exorcise that voice forever.

Traci Lords since has been established as a film and television star, musical artist, and her latest project, writing and directing. One of Traci’s first big breaks was in the film “Cry Baby,” where she starred along side Johnny Depp, Iggy Pop, Amy Locane and Ricki Lake. Her career continued with films like “Virtuosity” and “Blade” and appearances on television series like Melrose Place, Married with Children, Roseanne and Nash Bridges. Traci sits down with Luke and talks about everything from 80’s hair to her most iconic roles, and how she has grown into the multi-talented artist she is today. Traci tells Luke that as far as her career goes, she sees her role in Cry Baby as one of the most iconic of her films. From her famous blunt rocker bangs to her A-list costars like Johnny Depp, this role launched an iconic character and the stardom of Traci as an actress. The reason why this film stands out she discusses, is due to the role and costume that was created through Van Smith’s vision. To date, Traci says Cry Baby, The Profiler and Blade were some of her favorite roles. Traci goes on to discuss her new career in the music industry with her new album titled M2F2 she wrote and produced along side SeatoSun Music. 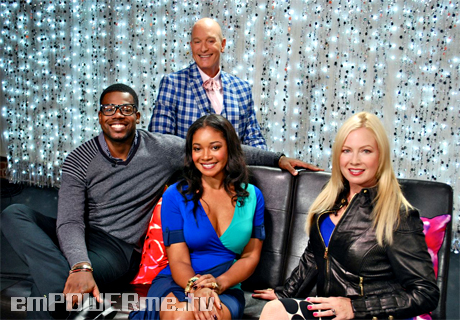